Recent additions to the Hardware/Hybrid Accelerated Cosmology Code (HACC) [Ref 1] framework allow for more detailed cosmology simulations. With the addition of baryonic matter [Ref 2], and a mechanism for designating particles as Active Galactic Nuclei (AGN), new forms of visualization are now possible.
These simulations are used to study the impact that feedback from AGN have on their surrounding matter distribution. AGNs are associated with violent bursts of energy that result from matter accretion onto supermassive black holes forming at the center of galaxies. Visualizing the temperature field of the baryon particles shows how this energy is imparted to the surrounding gas and affects subsequent structure formation. One can also examine entropy, which is a physical quantity acting as a thermodynamic record of heating and cooling processes during structure formation. Hence, the entropy contains a wealth of information regarding the various astrophysical processes that occurred during the formation of massive objects. Cosmological simulations that model feedback from AGN as well as other astrophysical phenomena including radiative cooling, star formation, and supernovae feedback are critical in understanding the structure formation history of the universe. 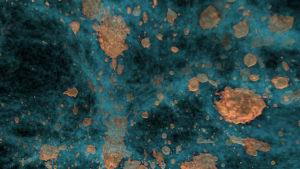 Figure 1. This visualization shows a small portion of a cosmology simulation tracing structure formation in the universe. The gold-colored clumps are high-density regions of dark matter that host galaxies in the real universe. This BorgCube simulation was carried out on Theta by the HACC team as part of the ALCF’s Theta Early Science Program.  This image was created with the vl3 framework (Argonne) using the global illumination algorithm described in [Ref 5]. Simulation and Data: The HACC team (Argonne National Laboratory). Visualization: Joseph Insley, Silvio Rizzi (Argonne National Laboratory) 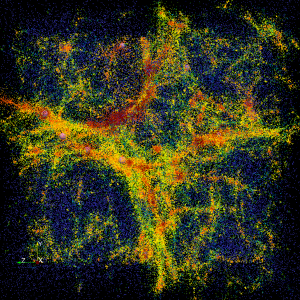 Provide a summary of information in the data set. The summary can be in any form deemed useful in describing the data set. This could include renderings, plots, scalars, narratives, etc. The contest will reward creativity in exploration and interpretation of the data. Science and art will be rewarded as will techniques that enable analysis.
Exploring visualization techniques is encouraged. There are multiple methods that may work well with this dataset, including (1) Visualizing dark matter and baryonic density by accumulating particles in a regular grid (Figure 1); (2) Visualizing temperature using SPH interpolation kernels (Figure 2)[Ref 4]; (3) Visualizing particles as points (Figure 3)[Ref 4] or point sprites [Ref 3] ; (4) Combining multiple visualization modalities for dark matter density, baryonic density, and AGNs (Figure 4).
As an additional challenge, participants are also encouraged to attempt visualization of derived quantities such as entropy S = ln ( T / p ^ (2/3) ), where T is the temperature field and p represents density.
Participants will be rewarded for creating an animation showing the time evolution of the simulation and illustrating the visualization techniques used. 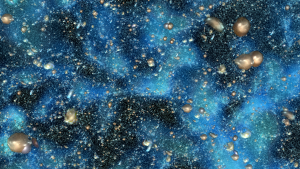